A paper covering for a natural stone arch at the entrance to a cluster of ruins. This temporary installation pays homage to the ancient Hittites who once dominated the region and whose red and black triangles are still visible high up in valley ruins. Attached to the stone with wheat paste, the paper sheets were designed to peel off, which they did after a winter and spring of rain and snow. Completed during an artist’s residency. 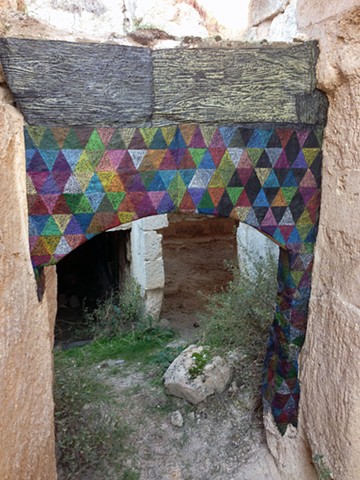 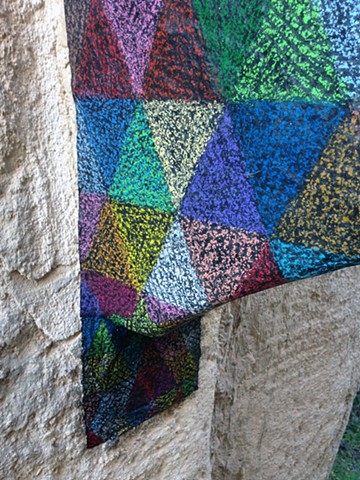 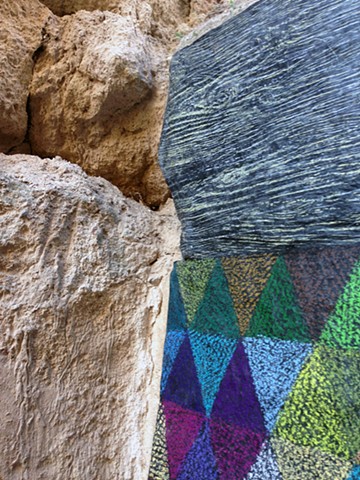 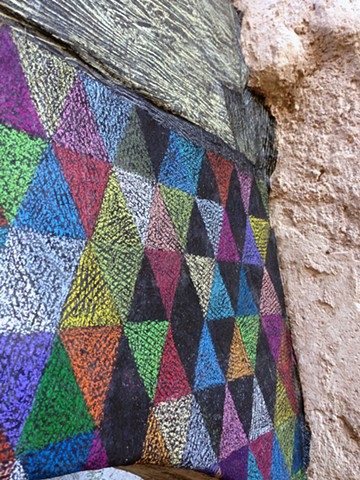 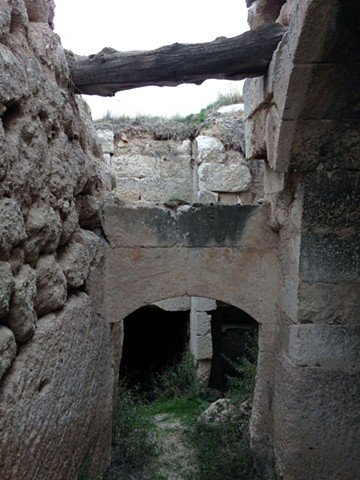 Triangle Arch site before my installation 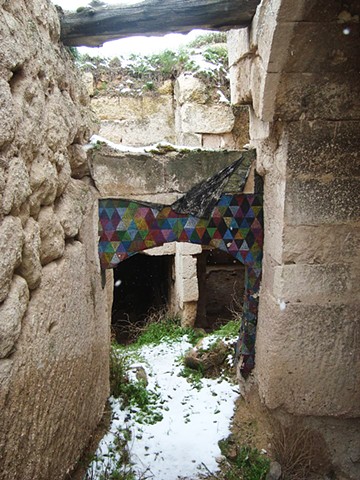 I recently discovered something new about myself – I love living in a cave. Probably not just any cave, but definitely the restored cave I lived in this fall during a month-long residency in the heart of Cappadocia, a region in central Turkey. I can’t describe what this place looks like. It has an astounding geologic, cultural, and aesthetic presence. Google “Cappadocia” and absorb the images. You’ll think you’re dreaming.

Many civilizations settled here, carving the natural tufa stone into great societies with dwellings, garden walls, and grandiose places of worship. Each subsequent culture built into and on top of the one before it. Add in the region’s volcanic and seismic activity and you have a landscape that must be seen to be believed.

The village where the residency is located is called Ibrahimpasa. It’s a stone’s throw from well-known tourist hubs like Goreme and Urgup. But there are no tourists here. It’s a real central Turkish farming village with traditional values and lifestyle. Women are not welcome in the teahouse, for example, where the men play backgammon and trade who knows what into all hours of the night, and you won’t see a woman behind the counter of a shop or the wheel of a car. The villagers don’t understand or value contemporary art, though some are trying. Yet everyone knows about the residency and is accustomed to “the artists of Paul and Willemijn,” our Dutch hosts. Although the artists are constant wonders of curiosity to the villagers, we are considered their guests in every respect. If I needed help, I would’ve knocked on any door or stopped anyone on the street.

The village is a stacked labyrinth of occupied homes, ruins, and caves in various states of livability, restoration, disrepair, or extreme danger. Trespassing is not a Turkish concept, so you can walk into any ruin or cave you deem fit for travel – keeping in mind that roofs and floors can collapse unexpectedly, along with adjoining hillsides. Prudence must supersede curiosity.

Walks from the village lead in every direction through extraordinary landscapes carved by nature and sprinkled with the ruins of ancient Hittites and Romans, Byzantines and Ottomans, and most recently by Greeks, Armenians, and Turks who lived and battled each other here well into the 20th century. Sculpted stone colonies of twisted shapes and shadows, some still bearing the painted symbols of life and religion, lure you around every bend. The place is sensual, complicated, intoxicating. I walked for hours some days, turning back only because the valley I entered simply ended.

I landed at this residency on serendipity’s wings. In mid-August I stumbled on the website of the artist-in-residence program at the Dutch-run Babayan Culture House in Cappadocia. It listed a last-minute opportunity for October-November. I applied on a whim. When the email arrived a few weeks later inviting me to come, I leaped into action. My five weeks in Turkey were spectacular, with Cappadocia and the residency exceeding my every expectation. It was a phenomenal experience to live briefly in this exotic place and be exposed to such an abundance of visual stimuli.

During the residency, I worked on two independent projects - 3 sets of mixed-media drawings and an outside installation. The drawings combine techniques I also use at home: stencils, stone and wood rubbings, Sumi ink, and metallic acrylic washes on Asian papers. When I look at them now I see an amalgamation of everything I inhaled in Turkey. They echo the shapes and shadows of the Cappadocian valleys and an Anatolian palette of gold, bronze, coral, greys and blacks, sky blue, and turquoise – a color you see on doors of those who have been to Mecca.

Drawing in a cave-studio was inspiring, but the best part was hanging and photographing the drawings in nearby caves and ruins – turning them into mini-installations. Wind blowing through open windows and doors invigorated the drawings. Sunlight intensified color and heightened translucency. They flapped and swayed in the breezes, inaugurating themselves into these ancient shrines. The drawings look different in the artificial light and near stillness of a gallery setting.

My outside installation, Triangle Arch, adorned a stone archway at the entrance to a cluster of ruins near the residency. This work pays homage to the Hittites, who once dominated the region and whose red and black triangles are still visible high up on valley ruins. I made it with simple materials: wax crayon rubbings and Sumi ink on thin Asian paper, attached to the stone with wheat paste. Photographs will remind me how it looked in its prime. Eventually the elements will wear down my handiwork to bare stone, just like most everything else in these valleys, adding my signature to the layers of civilization that created something in this place.